Outcry over Isis destruction of ancient Assyrian site of Nimrud

Activists, officials and historians have condemned Islamic State (Isis) for the destruction of the ancient Assyrian archaeological site of Nimrud in Iraq, with Unesco describing the act as a war crime.

“They are not destroying our present life, or only taking the villages, churches, and homes, or erasing our future – they want to erase our culture, past and civilisation,” said Habib Afram, the president of the Syriac League of Lebanon, adding that Isis’s actions were reminiscent of the Mongol invasion of the Middle East.

Iraq’s tourism and antiquities ministry said on Thursday that Isis had bulldozed the ancient city, south of Mosul, which was conquered by the militants in a lightning advance last summer.

“Daesh terrorist gangs continue to defy the will of the world and the feelings of humanity,” the ministry said, using the group’s Arabic acronym.

“In a new crime in their series of reckless offences, they assaulted the ancient city of Nimrud and bulldozed it with heavy machinery, appropriating the archaeological attractions dating back 13 centuries BC,” it said.

The destruction of the site, which became the capital of the Neo-Assyrian empire, was confirmed by a local tribal source speaking to Reuters.

“I condemn with the strongest force the destruction of the site at Nimrud,” Irina Bokova, the head of Unesco, said in a statement. Bokova said she had spoken with the heads of the UN security council and international criminal court on the issue.

Nimrud was first excavated in the 1840s by the British explorer Austen Henry Layard, who unearthed the winged bull gatekeeper statues later sent to the British Museum. The site also contains the palace of Ashurnasirpal, the king of Assyria.

Many of the site’s relics are in the British Museum and the Metropolitan Museum in New York, and other reliefs, wall paintings, clay tablets and ivory furniture recovered in the 1950s and 60s are in Iraq’s national museum in Baghdad, said Augusta McMahon, senior lecturer on Mesopotamia and the ancient near east at Cambridge, and who has carried out excavations in Iraq, Syria, Turkey and Yemen.

But the Nimrud site itself still hosts large numbers of reliefs and winged bull statues left in their original locations, and the palace grounds were reconstructed by the Iraqi government in the 1970s and 80s, said McMahon, adding that the winged bull statues in particular were probably targeted by the militants.

But she said Isis could not erase the ancient heritage, pointing out that the relics had survived prior invasions. “We still know the names and feats of Sennacherib and Ashurbanipal,” she said. “Similarly, the actions of Isis do not completely destroy memory, even while they destroy unique artefacts.”

Mark Altaweel, a lecturer in near eastern archaeology at University College London, said the Isis attack probably targeted the palace grounds and the reliefs there. No imagery of the destruction has yet been released by the group 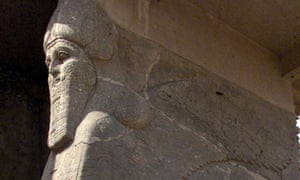 A tribal source told Reuters that Isis members had come “to the Nimrud archaeological city and looted the valuables in it and then they proceeded to level the site to the ground.

“There used to be statues and walls as well as a castle that Islamic State has destroyed completely,” the source was quoted as saying.

Tom Holland, a historian, told the Guardian: “It’s a crime against Assyria, against Iraq, and against humanity. Destroy the past, and you control the future. The Nazis knew this, and the Khmer Rouge – and the Islamic State clearly understand it too.”

The site’s destruction is the latest assault by Isis against the ancient heritage of minorities that have coexisted in the Middle East for millennia. Last week, the group destroyed ancient Assyrian artefacts in Mosul museum in a video that triggered widespread condemnation and horror. The group had earlier also burned many priceless manuscripts at the city’s library.

Christopher Jones, a PhD student in ancient history at Columbia University who blogs about the neo-Assyrian empire, said: “What is at risk? Everything that doesn’t conform to the most strict Wahhabi standards of acceptability, anything that is beloved by people that Isis doesn’t like, anything that represents non-Isis interpretations of Islam such as Shiism or Sufism, and anything from before the time of Muhammad.”

Sanhareb Barsom, an official with the Syriac Union party across the border in Syria’s Hassakeh province, where the Assyrian community has also come under assault by Isis, told the Guardian: “These are not Assyrian artefacts, these are artefacts for all of humanity.”

Isis kidnapped more than 200 Assyrians in a sweep through villages south of the Khabur river last month, where members of the community had settled after the Simele massacre in the 1930s by the then-kingdom of Iraq.

“They are targeting a people as well as its history and culture,” Barsom said, calling for the intervention of international organisations to save Iraq’s heritage. “It’s an attempt to end the existence of a people in their ancestral land.”

Thousands of Chaldeans, Iraq’s main Christian sect, fled their historic homes on the plains of Nineveh in the face of the Isis advance, escaping forced conversions. The militant group also attempted to starve and enslave thousands of members of the ancient Yazidi sect living around Mount Sinjar, triggering air strikes by the US-led international coalition.

“It’s unprecedented,” said Afram of the Syriac League. “No one did that before.” He compared the attack to that of the Mongol invasion of the Middle East, saying Isis militants were going further in their destruction of ancient heritage.

“This is as if they are specialised in erasing whatever signals that we were present in any part of this region,” he added.

Afram condemned the lack of action by the international community, saying there had to be a real military action plan, an inter-faith religious campaign to put an end to religious strife, security cooperation, and action by the “Arab armies” to end the crisis. He said the international community was treating the strife in the Arab world as if it were part of a “basketball game”.

“All this world, from the UN to the security council, really cares about nothing, they don’t care about people who are slaughtered on a daily basis,” he said. “I don’t believe that there is an international community, or that there are values anymore.”

David Vergili, a member of the European Syriac Union, said Isis had done “tremendous damage to the social fabric of the Middle East”.

He added: “Preserving cultural and historical heritage in Iraq and elsewhere should be a concern for the whole civilised world as the birthplace and epicentre of our civilisation.”